Apparently a phony high school football team from Ohio played the Hall of Fame Game in Canton, OH on Sunday against Florida's IMG Academy after playing Pittsburgh-area high school Sto-Rox on Friday. Lost by 12 to Sto-Rox, a very good Class AA school, but IMG is an all-star team and the best high school team in the nation who waxed them by 50 points. Got that ESPN TV money though. 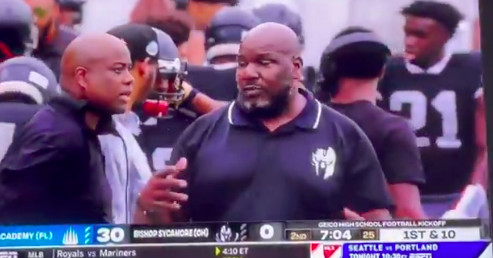 If you tuned in and watched high school football on ESPN this weekend you may have noticed the prestigious IMG Academy, the established, Florida-based incubator of college athletes and future NFL pros, play against the clearly outmatched Bishop Sycamore — a school almost nobody had ever heard of.
Now, that’s not exactly a new phenomenon. Most people don’t know about a variety of high schools around the United States, but when you get obliterated 58-0 it’s only natural people are going to start wondering why this Ohio high school was chosen to be in a televised showcase game. It’s only got weirder from there.
ESPN has not made an official statement at this time why Bishop Sycamore was approved for this Sunday showcase game. It appears from reports and the network’s own commentary team that the top requirement was to field a number of Division I players. This was not only to promote good TV with the promise of seeing future college stars, but also ensure the game was played with a modicum of safety, at least being between two teams of good players. Now, all signs point to Bishop Sycamore completely fabricating its roster to get on TV, and even ESPN’s own announcers were slamming what was unfolding before their eyes.


Max Preps shows Bishop Sycamore as being based out of Columbus, Ohio. It’s an online-only charter school. The school’s “website,” which deserves mocking quotations, has a blank page in its “about us” section, makes zero mention of education whatsoever, but does have a blog ... that’s basically a recipe for football players to get noticed by recruiters.
So, while technically listed as a “school,” almost nothing is known about Bishop Sycamore. The school is not listed in the directory of the Ohio High School Athletic Association. We know the team exists, we know it played last season and this was the start of its second year — the rest is all mystifying.
Where this really became alarming is when people began digging into the school more. On Friday Bishop Sycamore played Sto-Rox High School in Pennsylvania, losing 19-7. A highlight was posted from the game of a player, which was retweeted by the Bishop Sycamore Twitter account.

So, this meant that by all accounts players from Bishop Sycamore, an online school with no paper trail, appears to have lied to ESPN about having top-caliber athletes so it could play TWO GAMES IN THREE DAYS, ONE OF WHICH WAS AGAINST THE BEST SCHOOL IN THE COUNTRY. And, before you assume this was a JV team or some other loophole, Ben Koo of Awful Announcing looked into both games, and discovered alarming details.

It is absolutely, categorically unsafe for high school kids to play two games of football in three days. Heck, it’s dangerous for ANYONE to play competitive contact sports like this without adequate rest in between — and it’s made even worse considering many of the Bishop Sycamore players were two-way players.
So the question is now turning to “how the hell did this happen?” Both from the standpoint of a seemingly imaginary online school playing actual football games, to faking their way onto ESPN — presumably to boost their enrollment and keeping the money printer whirring. To that end ESPN is placing the blame on Paragon Marketing Group, a third-party entity responsible for organizing the team’s for ESPN’s Sunday showcase.

In a statement to Koo, ESPN said:

“We regret that this happened and have discussed it with Paragon, which secured the matchup and handles the majority of our high school event scheduling. They have ensured us that they will take steps to prevent this kind of situation from happening moving forward.”
Click to expand...

The real issue at play, assuming Bishop Sycamore is as fake as it appears to be, is just how easy it is to compete at a high school level, compete despite not being sanctioned by a state, and not have any oversight into player welfare, because athletic associations do not communicate across state lines. In an ordinary situation it’s assumed players, staff and administrators would step in to protect students — but nothing is ordinary about Bishop Sycamore, making this one of the most alarming high school athletic scams seen in years.

This story is beyond bizarre. I can't believe they made it onto ESPN.

SteelerFan448 said:
This story is beyond bizarre. I can't believe they made it onto ESPN.
Click to expand...

The memes of Cam Newton being signed by Bishop Sycamore are already making the rounds on FB.