Every pro football player starts somewhere, and almost every pro player has to play college football in order to get drafted, and usually have to go division 1. Just being able to play college football is huge for anyone, but not all college careers are created equal. ESPN recently put out an NFL Ultimate all-conference team, which made a 22-man roster of active players for each of the Power 5 Conferences, and one for non-power 5 schools, and ranked them in order based off a voting system. The article can be read below:

Our experts made the best 22-man starting lineup of current NFL players from every major conference.

The best of the best? The Big Ten: https://t.co/nTgTXbJe8U pic.twitter.com/Q1lqNLZSrr

The first two (who are in the same conference from college), are Heyward and Bush. They landed on the All Big Ten team, which ranked as the number one overall squad put together by ESPN’s analysts. Heyward’s college career took place at Ohio State University, where he played three seasons for the Buckeyes. As a college player, he amassed 162 total tackles, 31 tackles for loss, 15 sacks, and 1 interception. He also was a Rose Bowl Champion in 2010 and was named to the First Team All Big-Ten the same year. He was selected in the first round of the 2011 NFL Draft with the 31st overall pick. As a pro he’s only gotten better, and is currently going into his tenth year as a pro for the Steelers. He is the current captain of the defense, and sits at sixth all-time in Steeler quarterback sacks with 54, and is looking to work his way up the list next season. Fresh off his third straight Pro Bowl selection (2017-2019) and second selection to the First Team All-Pro in three years (2017 & 2019), he was a no-brainer for a selection to this team.

Bush attended the University of Michigan, Heyward’s rival college (they can be seen taking joking jabs at each other on social media about it). Spending three seasons as a Wolverine, he finished his collegiate career with 172 total tackles, 10 sacks, 1 interception, and 11 passes defended. He was selected in the first round of the draft, after the Steelers traded with the Denver Broncos to acquire the 10th overall selection to secure him. Last season in his rookie campaign, Bush had a stellar year on a top defensive unit in the NFL, finishing with 109 combined tackles, 1 sack, 2 interceptions, 4 fumble recoveries and 1 forced fumble. He was named to the PFWA All-Rookie team. He found a home on the defense quick and looks to have a bright future ahead of him, which was good enough to land him on this list among elite NFL talent.

The only player who was not a first rounder selected to a team, Smith-Schuster was elected as receiver on this squad alongside Keenan Allen of the Los Angeles Chargers. Smith-Schuster was drafted in the 2nd round of the draft in 2017 out of USC. In three seasons as a Trojan, he racked up 213 catches for 3,092 yards and 25 touchdowns. Since being in the league, he has caught 211 passes for 2,895 yards and 17 touchdowns, and is the youngest player in NFL history to reach 1,500 and 2,500 career receiving yards to date. He was also named to the 2018 Pro Bowl. He is a worthy choice who’s best football is most likely still ahead of him. 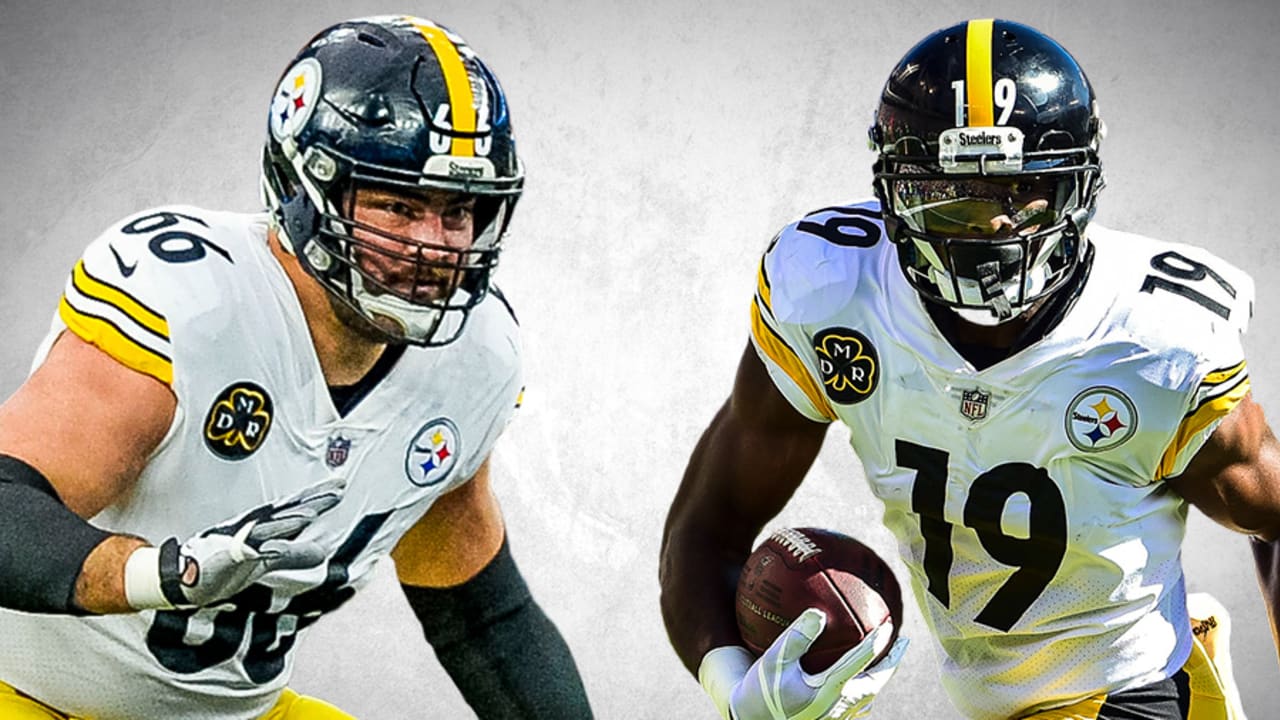 Decastro and Smith-Schuster were elected to the All Pac-12 NFL Team. PC: Steelers.com

The rest of the players selected to their respective conferences and positions are all deserving, but my only real complaint with the list is the absence of TJ Watt on the Big Ten team. I believe he should have been there over San Francisco 49ers edge rusher, Nick Bosa. Watt is two years his senior in the league and had a better 2019 campaign statistically. Both were voted to the Pro Bowl in 2019, with Watt having 14.5 sacks to Bosa’s 9, 8 forced fumbles (led the league), and 2 interceptions. Watt was also named to the First-Team All Pro, and was voted to the Pro Bowl in 2018 as well. Both are young stars who are extremely talented as well as productive, but the numbers speak for themselves.

Minkah Fitzpatrick was also left off the list. Although I believe he is deserving, coming from a conference in the SEC that has produced elite secondary talent such as New York Jets’ Jamal Adams and  Kansas City Chiefs’ Tyrann Mathieu, both who made the team and have seniority on Fitzpatrick, makes it a hard choice for anyone to pick who’s in and who’s out. This didn’t bother me as much as Watt being left off.

Inside Look to the Steelers Virtual Off-Season
Is Diontae Johnson’s Recent Weight Gain a Formula for Success?