The Top 5 Steelers Hall of Fame Players of All-Time

The Top 5 Steelers Hall of Fame Players of All-Time

There are 23 players enshrined in the Pro Football Hall of Fame that have worn a Pittsburgh Steelers uniform, third all-time only behind the Green Bay Packers and Chicago Bears.

The rich history of the franchise has allowed Steelers fans across generations to witness some of the greatest talent the NFL has ever had to offer.

With that being said, I thought it would interesting to make a “Top 5” list based on these players’ careers in the black and gold. I don’t take years with other teams into account, this list is based on a players’ career while playing for the Steelers.

We’ll see how my list lines up against other Steelers fans from all different eras. 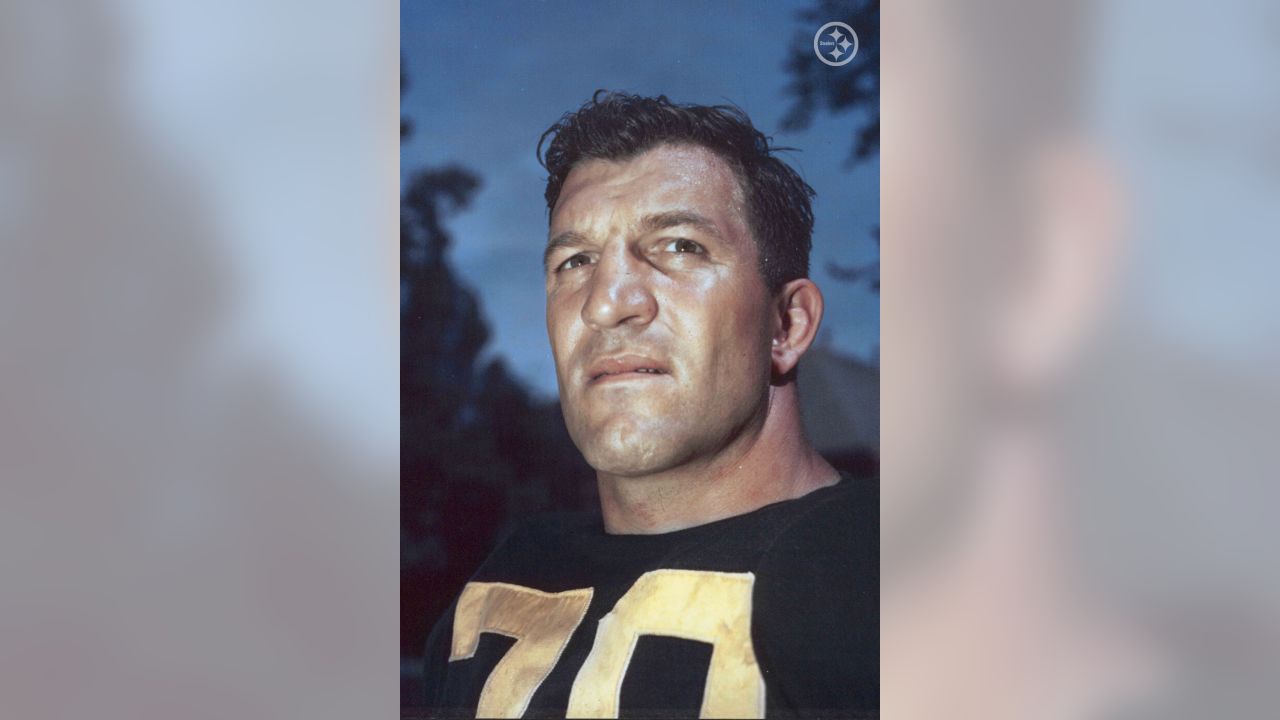 Ernie Stautner was inducted into the Pro Football Hall of Fame in 1969. | Steelers.com

Now I was only born in 1995, 26 years after Ernie Stautner was inducted into the Pro Football Hall of Fame, Class of 1969. It is, however, important to know your team’s history, and it would be nice to know about the first player in Steelers history to have his number retired.

Stautner started 143 games over 14 years for the Steelers in the 1950s and early ’60s. He was voted to nine Pro Bowls as well as five All-Pro selections.

While quarterback sacks weren’t recognized as a stat at the time, Stautner retired with three safeties, tied for the most in NFL history, as well as 23 fumble recoveries, which was third best in history at the time.

Stautner won the NFL Best Lineman award in 1957, and was a selection on the Steelers All-Time Team and NFL 1950s All-Decade Team. 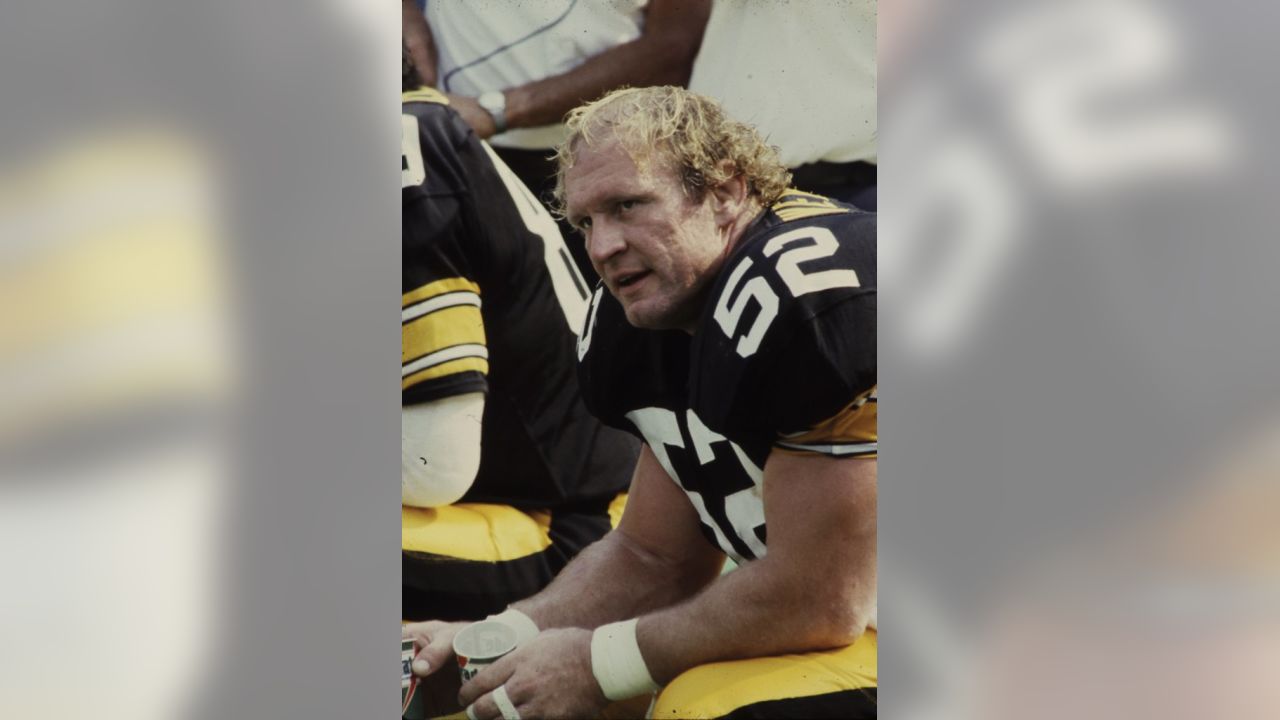 Mike Webster might be number five on this list, but he’s definitely the #1 offensive lineman in team history. “Iron Mike” is second in games played for the Steelers (220), and anchored the offensive line for 15 seasons and four Super Bowl titles, all while eventually being enshrined in the Pro Football Hall of Fame in 1997.

Nine Pro Bowls and five All-Pro selections later, Webster would go down as not only a Steelers icon, but also an NFL legend.

Regarded as the best center in NFL history, Webster is a member of the NFL’s 1970s & 1980s All-Decade Teams, as well as the NFL’s 75th & 100th Anniversary All-Time Teams. He was also voted into the Steelers All-Time Team.

Webster was the offensive captain for the Steelers for nine seasons, and set the standard at the center position that would be upheld by teammate and fellow Hall of Famer, Dermontti Dawson. 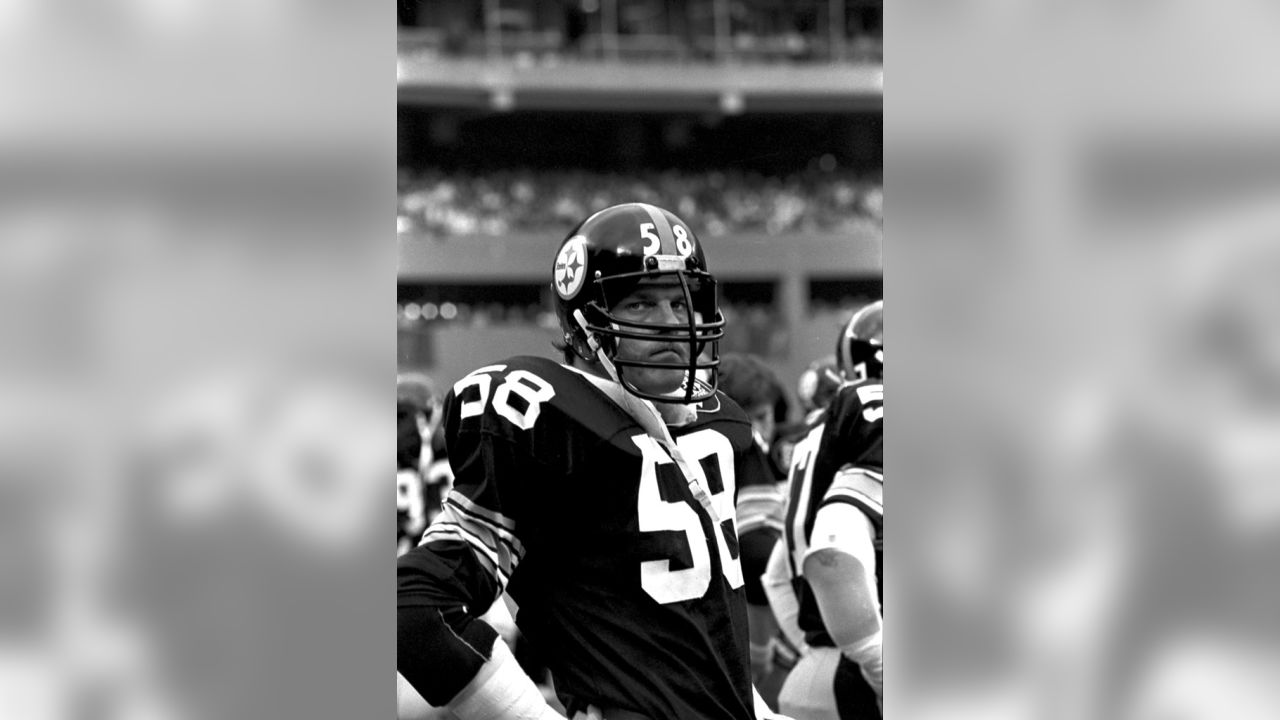 The iconic face of the Steel Curtain defense, Jack Lambert played linebacker for 11 years in Pittsburgh. Lambert made a living instilling fear in opposing players and offenses, earning the NFL Defensive Rookie of the Year award in 1974, and NFL Defensive Player of the Year in 1976.

Lambert would finish his career with 1,479 tackles, 23.5 sacks, and 28 interceptions, as well as winning four Lombardi Trophies with the Steelers dynasty of the 1970s.

With nine straight Pro Bowl selections from 1975-1983, and six All-Pro selections, Lambert would be inducted into the Hall of Fame in 1990. 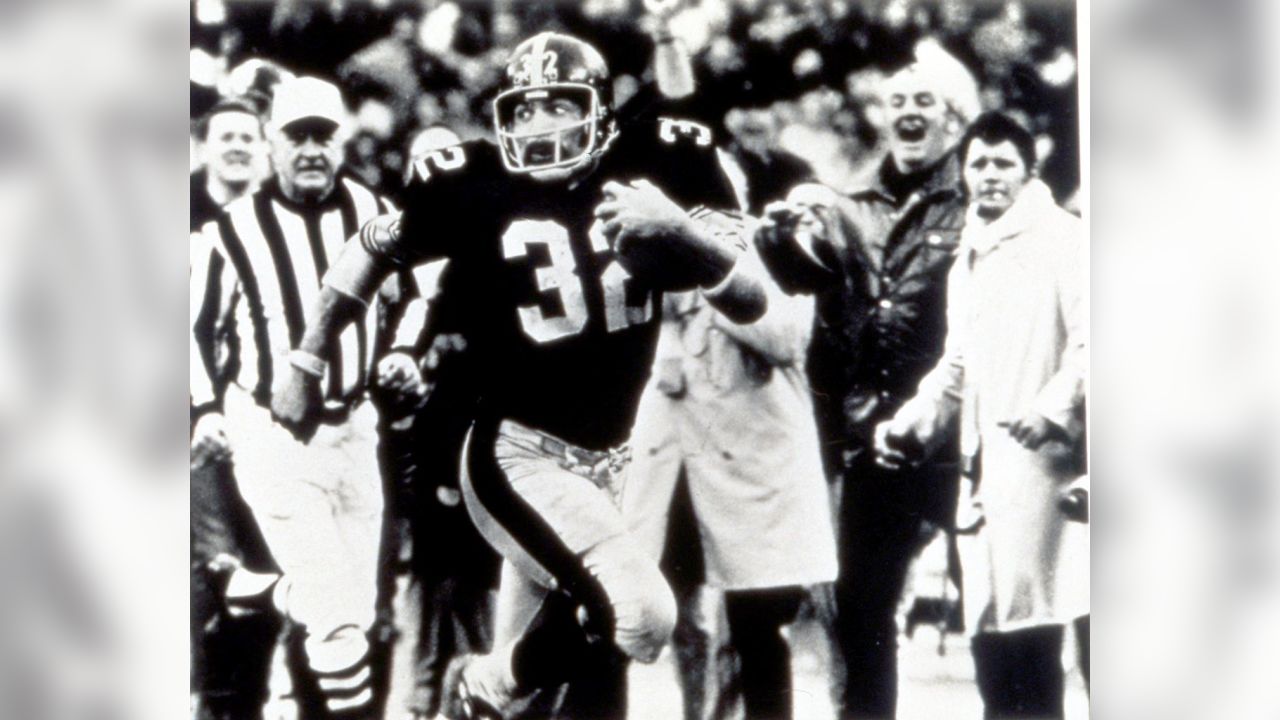 This 1990 Hall of Fame inductee is the Steelers all-time leader in both rushing yards (11,950), and touchdowns (91). Franco Harris spent 13 years and 165 as the Steelers cornerstone running back, rushing for over 1,000 yards eight times, becoming one of the Steelers most beloved figures.

Harris won the NFL Offensive Rookie of the Year award in 1972, and would go on to win four Super Bowls with the Steelers, capping off a 158-yard, one touchdown game in Super Bowl IX by becoming the first African-American player to be named Super Bowl MVP.

Harris would end up being selected to the NFL’s 1970s All-Decade Team, and the Steelers All-Time Team. He was also selected to nine Pro Bowls and three All-Pro teams. 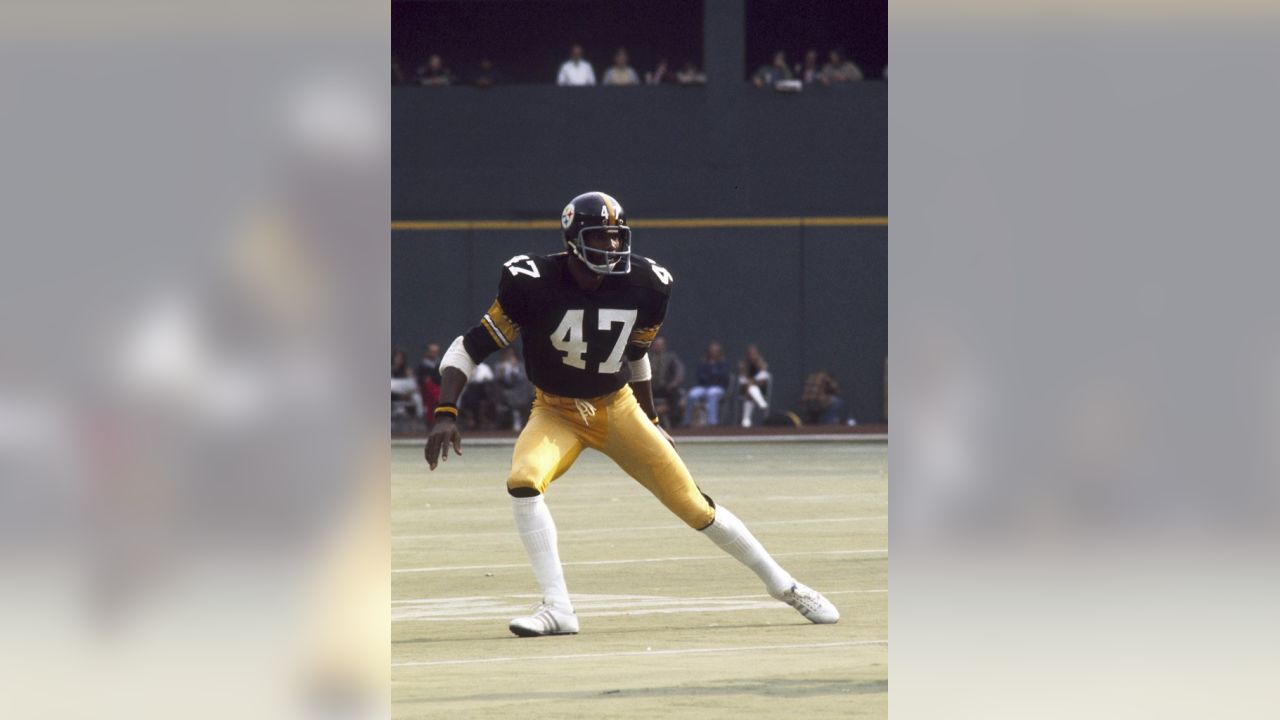 When you are able to get the rules changed, you’re good enough to be this high on this list. Mel Blount is one of the more iconic faces of the Steel Curtain defense of the 1970s.

After a season of not allowing a single touchdown in 1972, Blount specialized in taking receivers off the ball using his physicality. In 1975, Blount led the NFL with 11 interceptions, and by 1977, Blount caused the NFL to implement the five-yard bump rule.

Rule or no rule, Blount dominated in the secondary for 14 years, winning four Super Bowls, being selected to five Pro Bowls, four All-Pro teams, and finishing first all-time in interceptions for the Steelers (57).

Blount would win the NFL Defensive Player of the Year award in 1975, and would end up being selected to the NFL’s 1980s All-Decade Team, as well as the NFL’s 75th & 100th Anniversary All-Time Teams.

Blount would rightly take his place in Canton with the 1989 class of the Pro Football Hall of Fame. 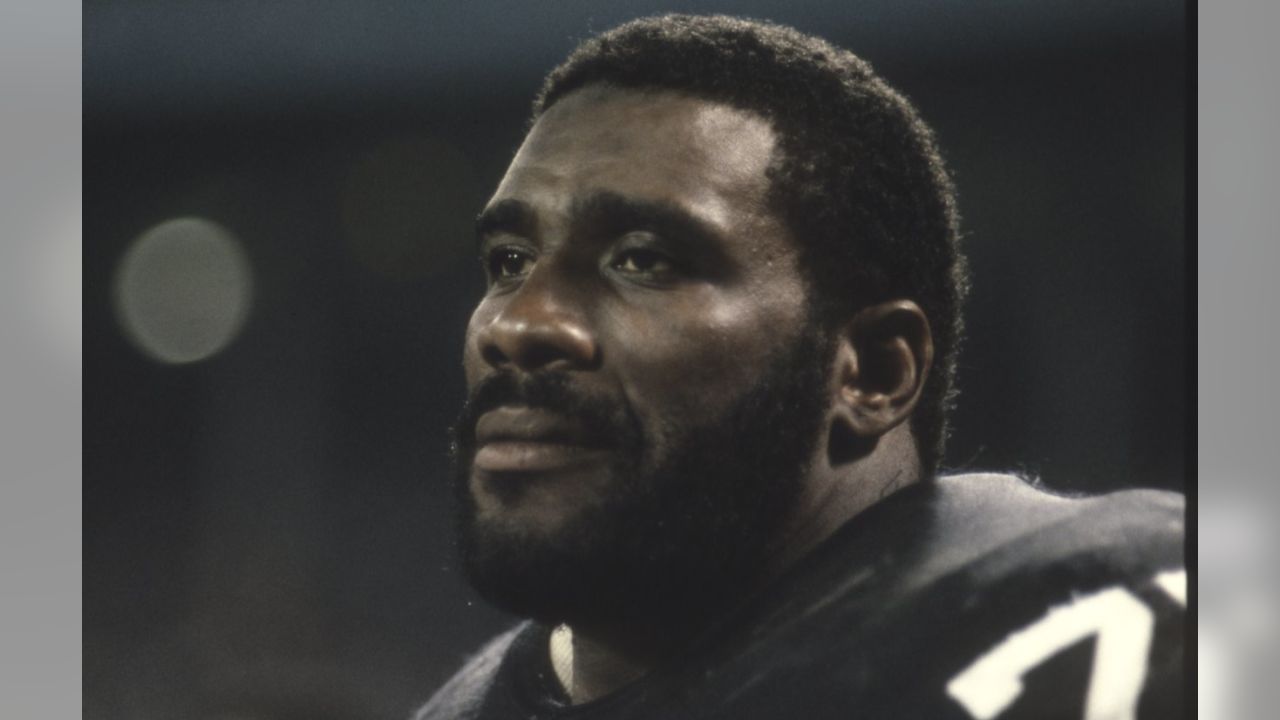 Greene joined the Steelers when they were still a losing franchise, and by the time he would retire in 1981, Joe Greene transformed the Steelers into one of the NFL’s greatest dynasties.

Greene finished his career with 77.5 sacks (3rd in franchise history), as well as being selected to the Pro Bowl 10 out of the 13 seasons he played in Pittsburgh. He was selected as a five-time First Team All-Pro, as well as the NFL’s 1970s All-Decade Team, and the NFL’s 75th & 100th Anniversary All-Time Teams.

He is the only other Steeler other than Stautner to have his number retired, and rightfully so, being the catalyst for not only the vaunted Steel Curtain defense, but the team as a whole that would go on to dominate the 1970s and win four Super Bowls.

While there are many Steelers that could make this list, I believe there’s only one that can have the number one spot, and that’s Joe Greene.

Do you agree with my list? Who do you have as your top five Steelers Hall of Fame players? Let us know below.

Also check out our list of the greatest players in Steelers history here if you want an extensive look at the best that’s ever suited up for the Steelers.

Managing Editor of SteelerNation.com, I’m a Steelers fan first, and a human being second. I BLEED black and gold! I love everything Steeler Nation and I’ve been with this staff since February 2018. I now reside in sunny San Diego, CA, but that doesn’t stop me from attending every game at Heinz Field, and a few away games as well if possible. I graduated from Old Dominion University in 2010, and if I’m not watching a Steelers game, you can catch me at the beach, stuffing my face with Golden Oreos, or in front of anything Marvel. I report breaking news, I'm the site's designer, and I’m a big Penguins fan too! Follow me on Instagram @bwall_24! And if you need a new website for your own business or personal brand, hit me up! I’m a full-time web developer as well! Check out PeterDarker.com. Go Steelers!

Young Steelers’ Quarterback Room has Much to Prove in 2022
Shading Steelers Hall of Famers Could Be Dangerous: Remembering Urban Legend of Mel Blount