Good News for 2022: Mike Tomlin has an Impressive History Against the NFC South

Good News for 2022: Mike Tomlin has an Impressive History Against the NFC South

If anyone knows the ins and outs of the NFC South, it’s Coach T.

To most of the young Steeler Nation faithful, Mike Tomlin is an irreplaceable staple of the Pittsburgh Steelers‘ organization; a man that has never endured a losing season in his 15 years as the head coach, has taken his squad to the playoffs in nine of those 15 seasons, held together one of the most contentious, personality-filled offenses in NFL history, and compiled a list of records that will garner him Hall of Fame status once he decides to hang it up.

None of that was certain, though. Especially not in 2001.

Tomlin, before becoming a favorite and household name, was a simple role player in an upstarting organization: he served as Defensive Backs Coach for the Tampa Bay Buccaneers. Tomlin probably knew that his future was above the secondary, saying during an AFC Coaches Breakfast in 2013, “The things that we talked about on a daily basis were food for growth from a young coach’s standpoint. I loved those guys.”

After five seasons of helping the Bucs’ defense reach sky-high levels that rivaled other legendary squads in NFL history (including a winning effort in Super Bowl XXXVII), teams began clamoring to get Tomlin on their staff.

Pump the brakes, Steeler Nation. Not yet. First, the soon-to-be head coach had to travel to Minnesota for a quick pit-stop. He would only serve as Defensive Coordinator for the Minnestoa Vikings for one season until the Rooney’s came knocking. Tomlin would become only the third Steelers’ head coach since 1969 (there have been more Popes in that time, by the way). The rest, as we all know, is history. With his eventual switch to AFC Football, Coach T most likely wasn’t prepared to use his varied NFC South knowledge too often, only facing the division once every four years. However, as the Steelers head coach, Tomlin would prove to have that division in his back pocket for all three go-arounds.

That is, everyone except the New Orleans Saints. But we’ll get there.

His first brush with his former division came in the first week of the 2010 season, which saw our Steelers squad squeak out a nail biter against the Atlanta Falcons at a sold-out Heinz Field. Ben Roethlisberger was wrapped up in his infamous sexual assault investigation and was suspended by the NFL for six games, so it was NFL quarterbacking legend Dennis Dixon’s time to shine (note the sarcasm). And shine he… didn’t. The game was a slug fest, with six combined field goals, the only points to witness during regulation for either team. Tied 9-9, the Steelers would win in overtime, no thanks to Dixon. Rashard Mendenhall would burst out a 50-yard scamper for the 15-9 OT winner. 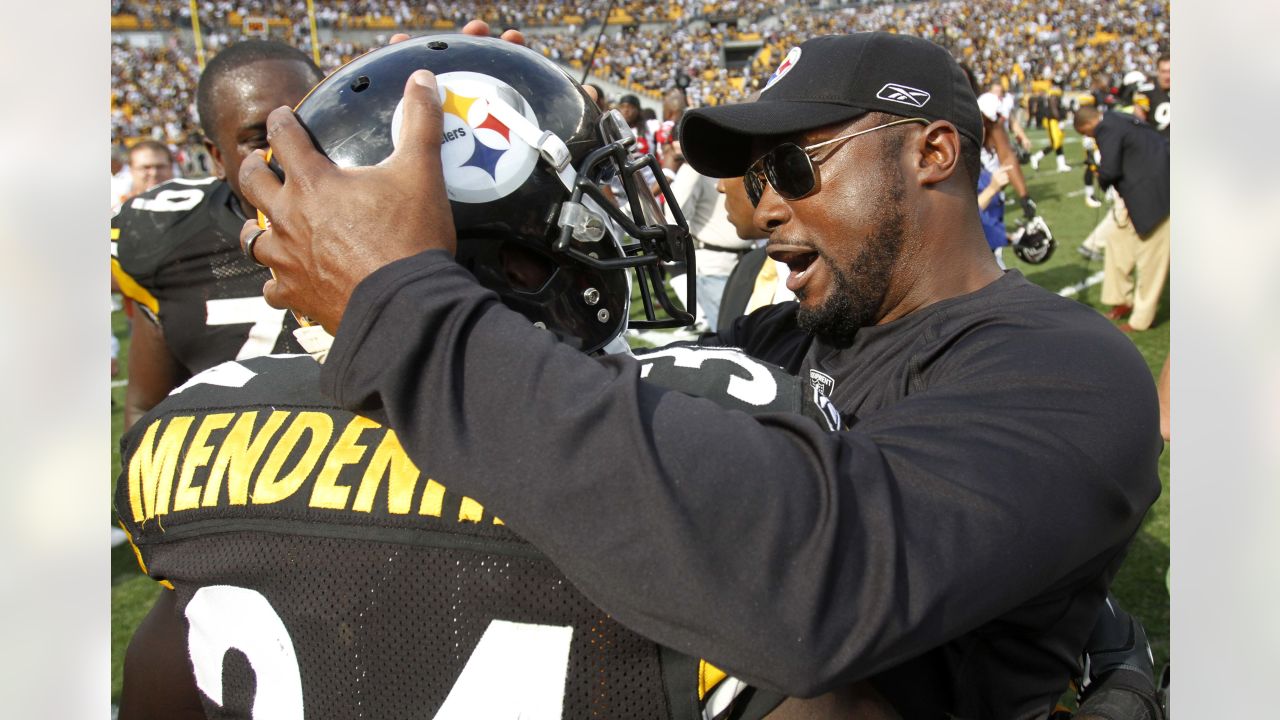 So far, so good for Tomlin. However, his eyes were set on September 26th; his official return to Tampa Bay. Seven years after he left, the team wasn’t all that recognizable. Still, even with quarterback Charlie Batch at the helm, the Steelers were able to entirely dismantle any semblance of football the Bucs had in them, crushing Tampa Bay by a score of 38-13. Tampa would eventually get a meager revenge against Tomlin with a 27-24 win in 2014, but it was too little, too late. The Buccaneers had been spiraling out of control for years, and wouldn’t win a playoff game between their 2003 Super Bowl winning effort and the 2020 season, when Tampa Tom [Brady] came to town and won his seventh ring. That loss in 2014 marked the only time an NFC South team (not named the New Orleans Saints) beat Mike Tomlin. 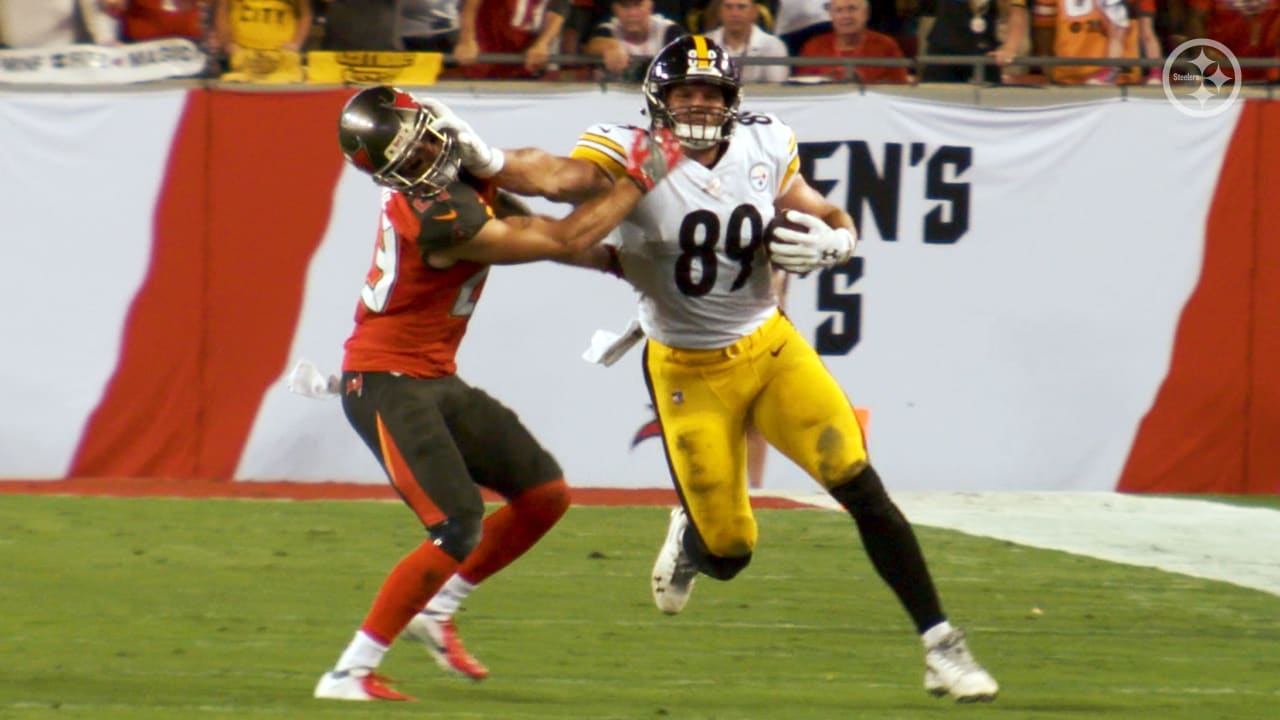 Vance McDonald (right) unloads a viscous stiff-arm against Chris Conte (left) in a win over the Tampa Bay Buccaneers in 2018. | Steelers.com

After a loss to New Orleans on Halloween of 2010, Tomlin would bounce back to trounce the Carolina Panthers by a score of 27-3. There lied a trend that would continue for the rest of Tomlin’s career, leading up to the 2022 season. Mike Tomlin, the man who once dominated the NFC South from within during his time with the Buccaneers, now dominated from the outside. From his first meetings with the division in 2010, Tomlin has never seen defeat at the hands of the Falcons or Panthers: a perfect 6-0. His record against his former employer is a respectable 2-1 (including a 2018 game that featured one of the best stiff-arms in recent NFL memory).

The story of the New Orleans Saints, however, has been the kryptonite to Tomlin’s Superman. A hapless 0-3 against the other Black and Gold team is a mark that Coach T would rather forget; But don’t think that those games weren’t competitive. The margin of victory for the Saints, in both the 2014 and 2018 games, was a slim 3 points. An unlucky bounce here, a double-doink there, and Tomlin could be holding his head even higher than he already is.

The teams have changed greatly since 2018, and with newly drafted quarterback Kenny Pickett getting more eyes for the starting job, the Week 10 matchup against New Orleans in the 2022 season might be the perfect chance for Tomlin to redeem himself against his historic boogeyman. With an impressive 8-4 record against the NFC South in his tenure, Tomlin now has two NFC South monkeys on his back to wrestle within the upcoming year: The New Orleans Saints, and Tom Brady. But hey, at least the Falcons and Panthers don’t seem to be much of a threat, right?

Does Mike Tomlin finally get his win against the Saints? Let us know by commenting below!

ESPN Reports Steelers May Be Finished With General Manager Interviews
NFL.com Points to Steelers Lack Of Depth At Pass Rushers As Biggest Problem