In case you missed it, the Pittsburgh Steelers inked Diontae Johnson to a new three-year contract that will keep him with the team through the 2024 NFL season. Over the two additional years of the deal, he will average $18.355 million a year, which slides him into the 17th highest paid wide receiver annually.

In a hot wide receiver market, many expected this number to come in around $20 million annually, if not even higher. This price tag is a solid deal for both sides as Johnson stated his desire to stay with the Steelers after his new contract was announced. 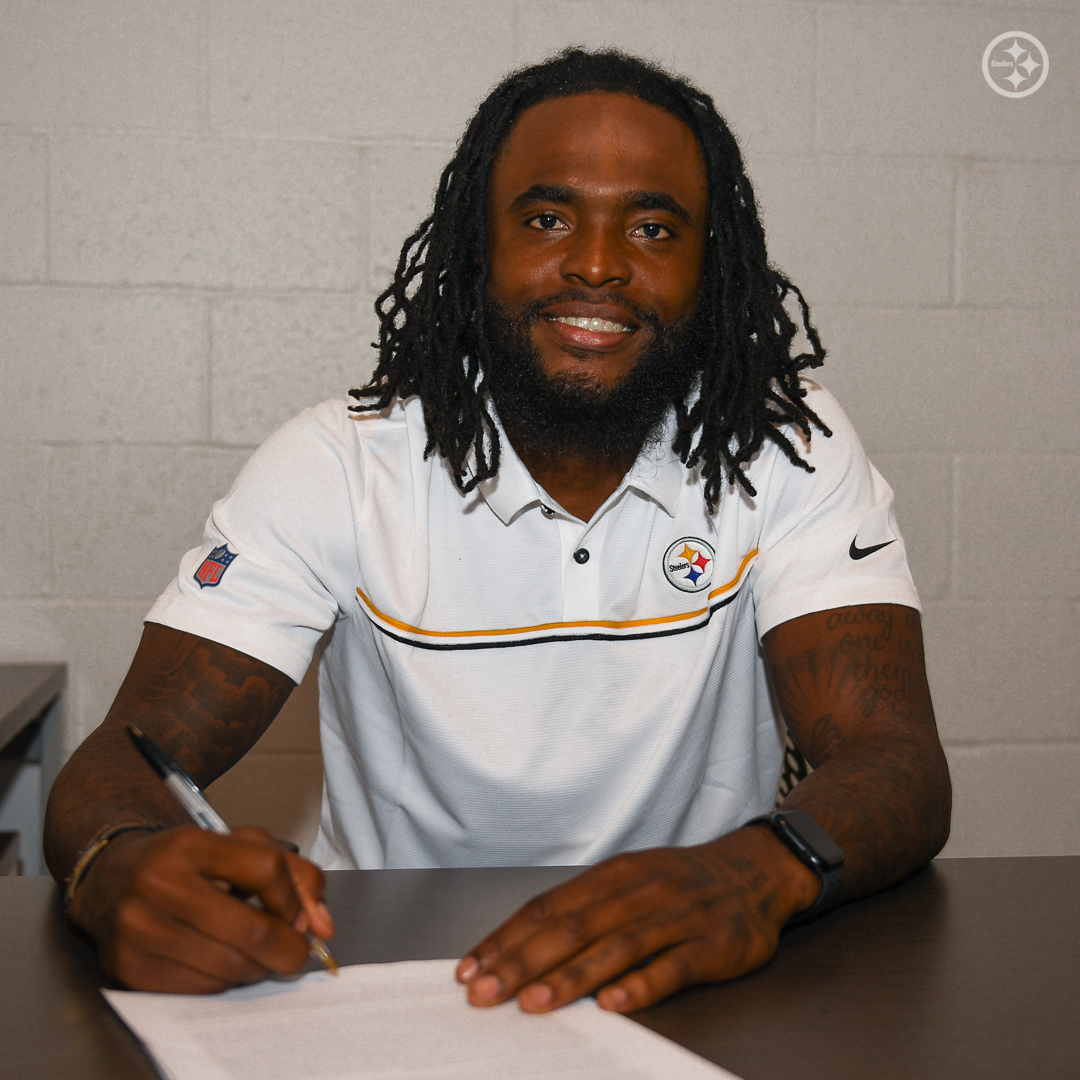 Diontae Johnson signs his extension with the Pittsburgh Steelers. – Steelers.com

While the numbers of the deal are good for both sides, Steeler Nation should be extremely happy as well because the timing of this deal couldn’t have been better. Getting Johnson back onto the field is obviously extremely important, as the team will have a new starting quarterback for the first time in almost two decades, and having their proven #1 wide receiver will go a long way in making that an easier transition.

Up until signing his extension on Thursday, Johnson has yet to take part in the team portions of practice whether it be 7 on 7, full team, 7 shots, etc. To Johnson’s credit, he has been present during the entire duration of training camp and done some individual work. He was also back in team drills during practice the same day his extension was announced.

There was never really any worry from Steeler Nation, as once Johnson returned to practice, it wasn’t going to take him long to get up to speed. He has tremendous work ethic all year long, so he was always going to be ready to go once he lined up in the offense.

The larger aspect of the timing for Johnson’s extension is actually the opportunity it gave other players while he wasn’t participating in team drills.

Steelers Wide Receivers Given Opportunities Because Of Diontae Johnson’s Absence

Over the first two weeks of training camp, both rookies, George Pickens and Calvin Austin III, had increased reps given to them due to Johnson’s absence. Being in their first NFL training camp, that experience is invaluable for two players who are expected to make contributions on offense sooner rather than later.

The additional reps being available didn’t just help the young guys out, as the Steelers have a few veterans on their roster that are also looking to get any opportunity they can to prove themselves to the coaching staff. The two primary beneficiaries are fifth-year veteran, Anthony Miller and third-year veteran, Cody White. Both Miller and White have had opportunities to run with the starting offense at times throughout camp, partially due to Johnson not being there, but also due to Chase Claypool missing some practices with an injury.

Head Coach Mike Tomlin, who is a new member of Instagram (@CoachTomlin) has definitely taken notice. The above photo is a screenshot from an Instagram story Tomlin posted during the first week of training camp, confirming that he is paying attention Miller and the solid performance he has had thus far with the additional opportunities.

White has also turned some heads, as he has been a favorite of the coaching staff’s this off-season. He has been able to do whatever they ask of him, while lining up at several different wide receiver spots within the offense.

Cody White is out here balling today. He playing like he tryna make the roster! Lol! Anthony McFarland looking great too. The running backs are giving the middle linebackers the business today with coverage out of the backfield. Snell playing well too. #HereWeGo

There are other notable names at the receiver position for the Steelers, such as Gunner Olszewski and Miles Boykin, but they appear to be farther down the depth chart currently with the four names mentioned previously getting the majority of the first team reps thus far in training camp.

All these additional reps for the rookies and veteran additions are huge as the coaching staff goes through their evaluations, which is why Johnson missing some practice time is likely the perfect scenario for the Steelers to better evaluate their roster.

I’ve been a freelance sports writer for several years, centered around football, baseball, basketball, and fantasy sports. I’m born and raised in Youngstown, Ohio and a diehard Steelers fan. I love sharing my thoughts and opinions on all things sports, especially when it comes to the Pittsburgh Steelers. I also received my BS in Chemical Engineering from The Ohio State University in 2016, and have a career in Material Research and Development. Follow me on Twitter!