Chase Claypool has a long way to go in order to make good promises of being a top-three wide receiver in the league after the Pittsburgh Steelers’ thrilling 23-20 OT win over the Cincinnati Bengals. In Ohio, the 24-year-old Notre Dame product was showing flashes of the potential to be in those conversations and helping the black and gold’s offense contribute to a win.

The young Canadian, who made those bold statements on the I Am Athlete podcast in June, hauled in four balls for 18 yards. He also led the Steelers on the ground with six attempts for 36 yards. His longest run went for 15 yards on a jet sweep in the first quarter during the offense’s only touchdown drive of the day.

Claypool showed off his talent which made him a 2020 second-round pick in his rookie year. He found some chemistry with Ben Roethlisberger and tied the franchise rookie record of 11 touchdowns scored shared by the great Franco Harris and Louis Lipps. The 6’4″, 238 lbs receiver finished with 62 receptions for 873 yards and nine touchdowns through the air and added 10 rushes for 16 yards and two scores.

In his second season, Claypool’s yards and targets in the passing game stayed about the same but his average rushing attempt jumped from 1.6 to 6.9. The biggest struggle for the sophomore from Abbotsford, B.C was in finding the endzone, as he only caught two scores.

There’s no question about Claypool’s talent. He made a spectacular one-handed grab against the Bengals on Sunday in the second quarter. With the Steelers on a second and goal, Mitch Trubisky dropped back and threw the ball in the area where only Claypool could get it. Boy, did he get it. After cutting in to draw Bengals defender and former Steeler Mike Hilton to the inside, the third-year wideout fell back towards the ball grabbing it with his right hand before being hauled to the ground. 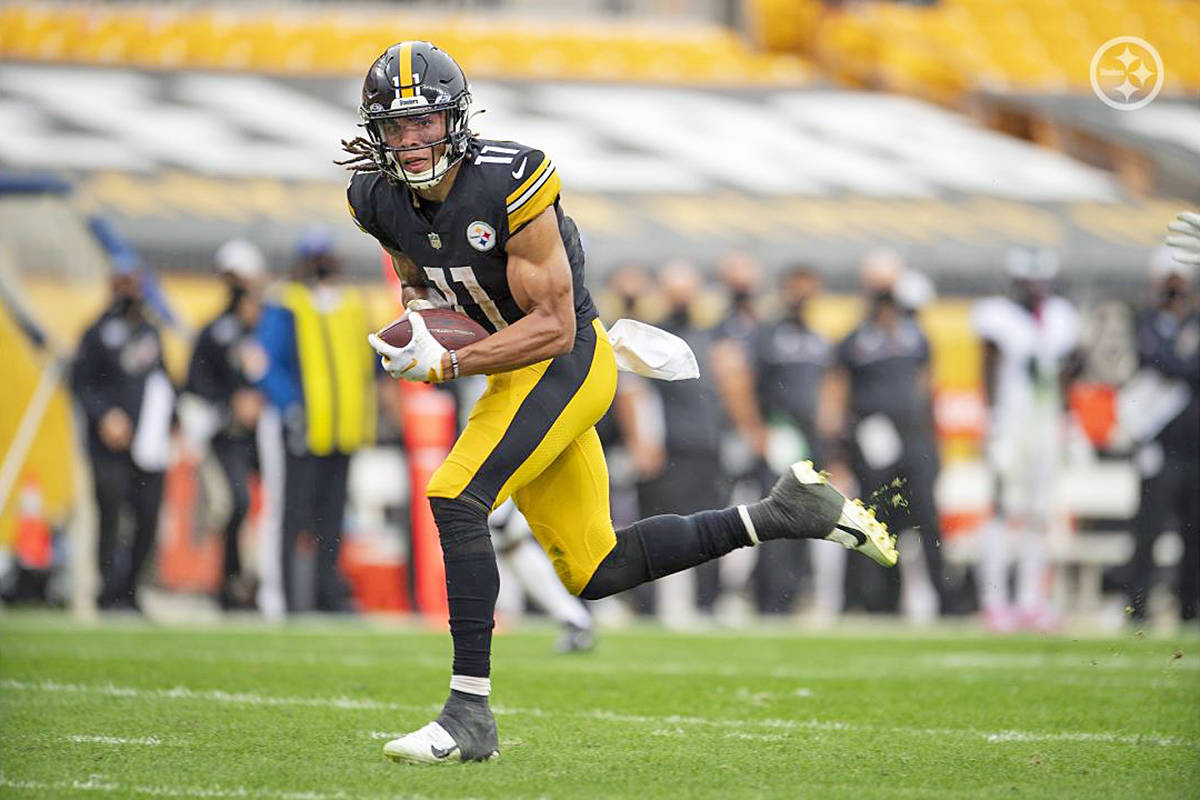 Crowded House: Claypool Will Be Fighting for Touches

The Steelers’ offense struggled to move the ball against the Bengals with only 267 total yards of offense in 26:17 minutes of possession. Tight end Pat Freiermuth led the team in receiving yards with five receptions for 75 yards including a key 10-yard catch with 21 seconds left to go in overtime to set up Chris Boswell’s winning kick.

The second-year big man from Penn State won’t be the only teammate Claypool will have to fight with for targets this season. Diontae Johnson, Pittsburgh’s leading receiver last season and the only to reach the 1000-yard mark, was Trubisky’s safety blanket at Paycor Stadium with seven catches on 12 targets for 55 yards.

Training camp phenom George Pickens drew some comparisons to Hines Ward, another University of Georgia alum, from Cam Heyward on his podcast. The rookie had a quiet debut catching only one ball for three yards, but like Claypool the talent level is obvious.

Even Najee Harris is another guy the Steelers like to use in the passing game. The second-year man from Alabama finished his rookie season with 74 receptions, the second highest on the team, and the most by a running back in the league.

The other question surrounding the young receiver who has one year left on his contract after the current is his maturity. His presence on social media along with game-day mishaps, like the one last year in Minnesota when he cost the team time celebrating a first down with under a minute left, have made fans frustrated.

Nick Farabaugh of Pittsburgh Sports Now pointed out on Twitter, that Claypool’s situational awareness came in handy during the game and potentially saved a penalty. He was also strictly business after making his exceptional one-hander.

What do you think Steeler Nation, does Claypool have it in him to be a top three receiver in the league? Do you think he showed off the start of something in Cincy? Let us know in the comments below!

Coming to the Steelers home opener against the Patriots? Come tailgate with us! All you can drink and eat. Click here.

Hello Steeler Nation! I hail from the great city of Kingston, Ontario, Canada, hometown of The Tragically Hip. I grew up a Steelers fan because my uncle is and he used to live there. I saw the Steelers beat the Bengals at Heinz Field in 2017 in my only visit to Pittsburgh.